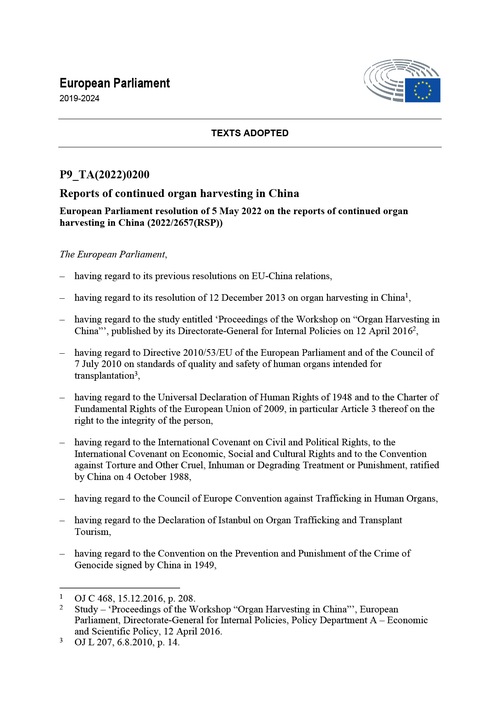 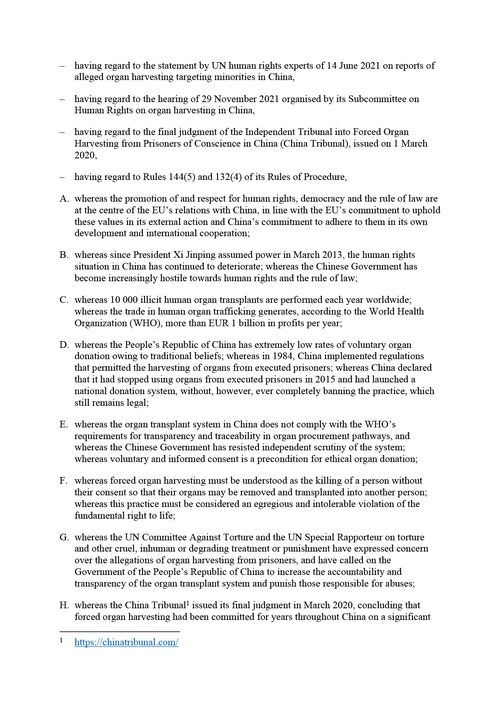 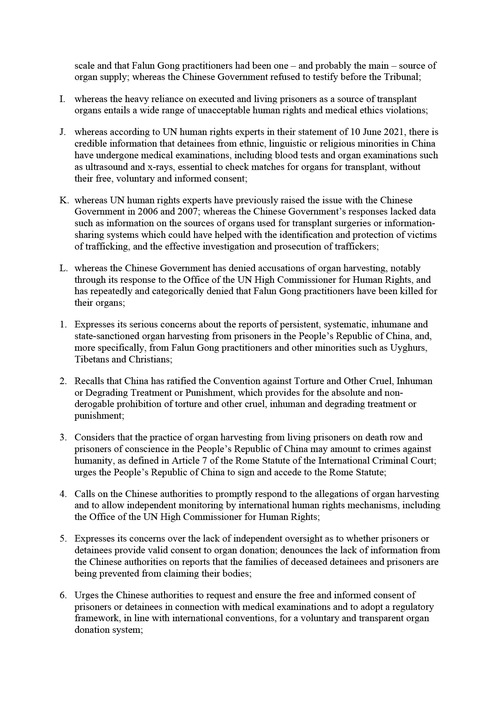 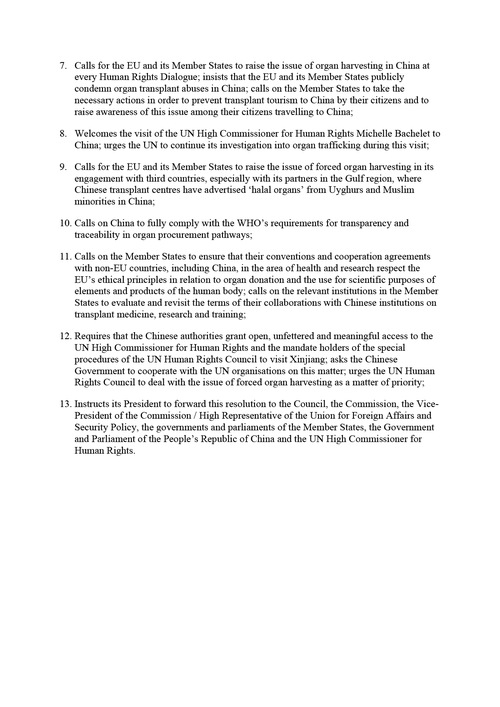 – having regard to its previous resolutions on EU-China relations,

– having regard to its resolution of 12 December 2013 on organ harvesting in China,

– having regard to the study entitled ‘Proceedings of the Workshop on “Organ Harvesting in China”’, published by its Directorate-General for Internal Policies on 12 April 2016,

– having regard to Directive 2010/53/EU of the European Parliament and of the Council of 7 July 2010 on standards of quality and safety of human organs intended for transplantation,

– having regard to the Universal Declaration of Human Rights of 1948 and to the Charter of Fundamental Rights of the European Union of 2009, in particular Article 3 thereof on the right to the integrity of the person,

– having regard to the Council of Europe Convention against Trafficking in Human Organs,

– having regard to the Declaration of Istanbul on Organ Trafficking and Transplant Tourism,

– having regard to the Convention on the Prevention and Punishment of the Crime of Genocide signed by China in 1949,

– having regard to the statement by UN human rights experts of 14 June 2021 on reports of alleged organ harvesting targeting minorities in China,

– having regard to the hearing of 29 November 2021 organised by its Subcommittee on Human Rights on organ harvesting in China,

– having regard to the final judgment of the Independent Tribunal into Forced Organ Harvesting from Prisoners of Conscience in China (China Tribunal), issued on 1 March 2020,

A. whereas the promotion of and respect for human rights, democracy and the rule of law are at the centre of the EU’s relations with China, in line with the EU’s commitment to uphold these values in its external action and China’s commitment to adhere to them in its own development and international cooperation;

B. whereas since President Xi Jinping assumed power in March 2013, the human rights situation in China has continued to deteriorate; whereas the Chinese Government has become increasingly hostile towards human rights and the rule of law;

C. whereas 10 000 illicit human organ transplants are performed each year worldwide; whereas the trade in human organ trafficking generates, according to the World Health Organization (WHO), more than EUR 1 billion in profits per year;

D. whereas the People’s Republic of China has extremely low rates of voluntary organ donation owing to traditional beliefs; whereas in 1984, China implemented regulations that permitted the harvesting of organs from executed prisoners; whereas China declared that it had stopped using organs from executed prisoners in 2015 and had launched a national donation system, without, however, ever completely banning the practice, which still remains legal;

E. whereas the organ transplant system in China does not comply with the WHO’s requirements for transparency and traceability in organ procurement pathways, and whereas the Chinese Government has resisted independent scrutiny of the system; whereas voluntary and informed consent is a precondition for ethical organ donation;

F. whereas forced organ harvesting must be understood as the killing of a person without their consent so that their organs may be removed and transplanted into another person; whereas this practice must be considered an egregious and intolerable violation of the fundamental right to life;

G. whereas the UN Committee Against Torture and the UN Special Rapporteur on torture and other cruel, inhuman or degrading treatment or punishment have expressed concern over the allegations of organ harvesting from prisoners, and have called on the Government of the People’s Republic of China to increase the accountability and transparency of the organ transplant system and punish those responsible for abuses;

H. whereas the China Tribunal1 issued its final judgment in March 2020, concluding that forced organ harvesting had been committed for years throughout China on a significant scale and that Falun Gong practitioners had been one – and probably the main – source of organ supply; whereas the Chinese Government refused to testify before the Tribunal;

I. whereas the heavy reliance on executed and living prisoners as a source of transplant organs entails a wide range of unacceptable human rights and medical ethics violations;

J. whereas according to UN human rights experts in their statement of 10 June 2021, there is credible information that detainees from ethnic, linguistic or religious minorities in China have undergone medical examinations, including blood tests and organ examinations such as ultrasound and x-rays, essential to check matches for organs for transplant, without their free, voluntary and informed consent;

K. whereas UN human rights experts have previously raised the issue with the Chinese Government in 2006 and 2007; whereas the Chinese Government’s responses lacked data such as information on the sources of organs used for transplant surgeries or information sharing systems which could have helped with the identification and protection of victims of trafficking, and the effective investigation and prosecution of traffickers;

L. whereas the Chinese Government has denied accusations of organ harvesting, notably through its response to the Office of the UN High Commissioner for Human Rights, and has repeatedly and categorically denied that Falun Gong practitioners have been killed for their organs;

1. Expresses its serious concerns about the reports of persistent, systematic, inhumane and state-sanctioned organ harvesting from prisoners in the People’s Republic of China, and, more specifically, from Falun Gong practitioners and other minorities such as Uyghurs, Tibetans and Christians;

2. Recalls that China has ratified the Convention against Torture and Other Cruel, Inhuman or Degrading Treatment or Punishment, which provides for the absolute and non-derogable prohibition of torture and other cruel, inhuman and degrading treatment or punishment;

4. Calls on the Chinese authorities to promptly respond to the allegations of organ harvesting and to allow independent monitoring by international human rights mechanisms, including the Office of the UN High Commissioner for Human Rights;

5. Expresses its concerns over the lack of independent oversight as to whether prisoners or detainees provide valid consent to organ donation; denounces the lack of information from the Chinese authorities on reports that the families of deceased detainees and prisoners are being prevented from claiming their bodies;

6. Urges the Chinese authorities to request and ensure the free and informed consent of prisoners or detainees in connection with medical examinations and to adopt a regulatory framework, in line with international conventions, for a voluntary and transparent organ donation system;

8. Welcomes the visit of the UN High Commissioner for Human Rights Michelle Bachelet to China; urges the UN to continue its investigation into organ trafficking during this visit;

9. Calls for the EU and its Member States to raise the issue of forced organ harvesting in its engagement with third countries, especially with its partners in the Gulf region, where Chinese transplant centres have advertised ‘halal organs’ from Uyghurs and Muslim minorities in China;

10. Calls on China to fully comply with the WHO’s requirements for transparency and traceability in organ procurement pathways;

11. Calls on the Member States to ensure that their conventions and cooperation agreements with non-EU countries, including China, in the area of health and research respect the EU’s ethical principles in relation to organ donation and the use for scientific purposes of elements and products of the human body; calls on the relevant institutions in the Member States to evaluate and revisit the terms of their collaborations with Chinese institutions on transplant medicine, research and training;

13. Instructs its President to forward this resolution to the Council, the Commission, the Vice-President of the Commission / High Representative of the Union for Foreign Affairs and Security Policy, the governments and parliaments of the Member States, the Government and Parliament of the People’s Republic of China and the UN High Commissioner for Human Rights.